Stack traces provide information on the threads at a specific point in time. The top of each thread shows the header.

The link below is going to provide you with more information about the use of stack traces.

The header appears at the top of each stack trace for each thread. The header colors matches the thread state. See the Threads page for more information on the state and color information.

The headers format is

This is shown through the various methods and code lines that have been executed. The stack trace consists of single frames and each frame shows the class, method and (if available) line number of the code which called the next frame, or in which code is currently execution.

The stack traces in FusionReactor are are displayed in two formats - Rich and Plain :

This is only available in FusionReactor Ultimate Edition.

With the introduction of the Production Debugger in FusionReactor 6, Stack Traces have also been given an extra feature to create Breakpoints directly for a source file by clicking on it in the Stack Trace: 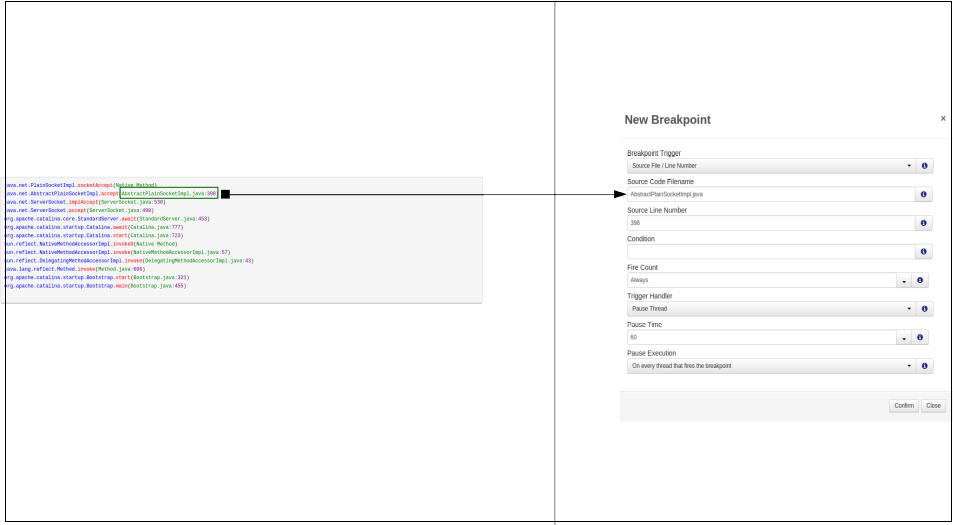 It is also possible to create a trigger directly for a Request that failed due to an Exception, from the Request Detail page:

For further information about how to create and use Breakpoints, see Debug.

Thread 81 will have the following shown in the stack trace at the location where its acquired the lock.

Locked means that the thread has ownership of the object with hash code 0x77a224c4, in this case a java.lang.Object.  While this thread owns the lock, no other thread can have it, blocking them from entering this portion of code (often a function).

Waiting means that the thread is waiting for the object with hash code 0x77a224c4, in this case a java.lang.Object.

By clicking on a lock link, the page is redirected to the 'Stack Trace All Threads' and a filter is applied so that only threads that have either acquired or are waiting on a chosen lock are shown. A banner is displayed at the top of the page to show this. An example of a lock link is shown below.

Here is an example of a blocked thread running the synchronised_released.jsp test page. 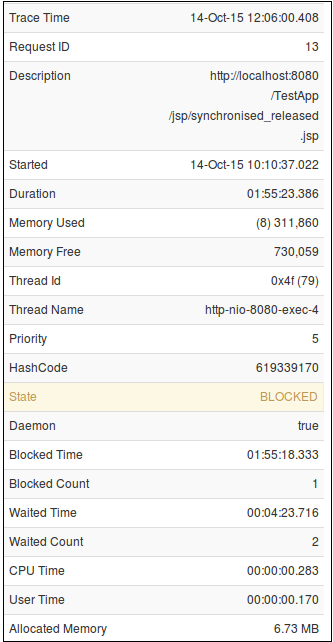 The table shows the following information :